Are you interested in being involved with local theatre? The Mad Hatters (Highlands Amateur Theatrical Society) group is planning to present a play later this year, around September, and is looking for people wanting to join in either on stage or backstage. If you are interested and are willing to commit to regular evening rehearsals, please contact Susan Bennett (57904333) or Pauline Roberts (57969301) before the end of June. There are small parts for a limited number of children, but only if accompanied to rehearsals by an adult.

Mad as a Hatter

Or How Amateur Theatre Came to Highlands

People sometimes think that living in the country limits one's opportunities, but I say, "NOT SO!".

Read more: Mad as a Hatter 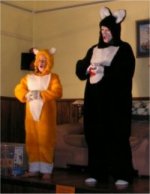 Susan Bennett reflected that the “Highlands Amateur Theatrical society (H.A.T.S or ‘Mad Hatters’) grew out of the ‘Highlands Scribblers’, (Writing Group), late in 2004.  Having not written anything new for the evening’s meeting, I took along a play I had written for a school concert in 1989.  Encouraged by the response, I wrote some new scenes and Leone Gabrielle and Pauline Roberts suggested it was suggested that the play be performed.  I placed an ad in the ‘Highlander Newsletter’, volunteers gathered and we began rehearsals.”  Our first play, “Sir Kenneth’s Quest” was performed at the Highlands hall in June 005 and enjoyed a warm reception.  It featured Pauline and Peter Roberts, Paula and Isobel Lade, Shaun Gabrielle, Ray Dearness, Trish, Freya, Will and Jeremy Graf, Jill Maclean, Susan and Laura Bennett, plus the inimitable ‘Marmaduke’ (who appeared earlier in the year at the HiArts Exhibition in his own installation entitled ‘Interview with a Pheasant’”.

What do we do and how can you get involved?

Mad Hatters is a group committed to ‘having a go’ and the fun of performing.  Our main focus is performing one play each year (“The Merchant of Rippoph” was performed in November 2006), but from time to time, we do hold short term activities and workshops.  These are generally free and open to anyone wishing to hone their acting

Information is listed in the ‘Granite News’ when activities or play casting are coming up.  We are always on the lookout for people willing to join in, whether on stage or in a supporting capacity. 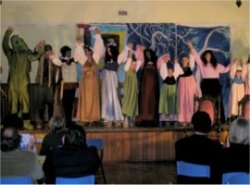