You may book the Highlands Community Hall by contacting Paula on 0419 551 882 or email This email address is being protected from spambots. You need JavaScript enabled to view it..

Charges for use of Highlands Community Hall facilities

The hall has a fully equipped kitchen, tables,  chairs,  cutlery and crockery for up to 50 people and these are all included in the hire rate .

$200 per year for local community groups.

Having a party at your place?

A torch is valuable when using the hall at night.

When opening the building

Power should already be switched on.  The security light at main should make it easier to enter the building at night.
Turn on individual light switches as needed.
NOTE: For the new powerboard Up is On!  Down is Off!
Other individual switches are as normal.  Light switches for the main hall are in the kitchen.

Remember SMOKING IS NOT PERMITTED inside public buildings.

When closing the building

Please leave the Highlands Community Hall clean and tidy.
Please collect all your rubbish and take it away with you.
All lights, gas heaters, hot water service, urns, stove and ceiling fans must be turned off before leaving.
Arrange furniture as it was on your arrival.
After use of meeting room close blinds to protect historic photos from fading.
If the refrigerator is empty, turn off refrigerator and leave door ajar.
Leave power on for safety, but turn off all individual lights and appliances..
Use push button time switch only for front external light to leave the building safely at night.
Return key to Sue or Judy.
Report any damage or problems to Gayle.

Details accurate as at November 2021 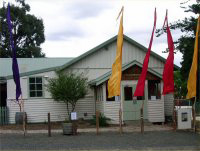 On the 12th May 1902 it was decided to build a hall/school in Highlands which was then known as Fassifern.  At a cost of less than 50 pounds the building was completed and called "The Fassifern Hall".  Jack McAlpin was the first President of Hall and School. On the 1st November 1902 the School was opened.  At various times over the next 60 years the school operated in combination with schools at Kobyboyn and Molesworth.
In 1907 the Hall was renamed "The Highlands Hall" as it was discovered there was another area called Fassifern.
In the early 1920's the building was moved to its present site, on land donated by Alex Chisholm.  This was carried out with a team of 16 horses.  So successful was the venture that the pictures on the wall were still in place on completion.  A separate school room was added and a new floor for dancing.
Sadly, in 1934 the hall was burnt to the ground.  It was thought that a log fell out of the fireplace.
On the 23rd March 1935 the final payment was made on the new Hall.

In addition to being the venue for the local school, the hall was used for dances, socials, concerts, table tennis, badminton and community meetings. For a period, it was also home to the Presbyterian Church services and Sunday School.  Over the years there has been at least one wedding and a funeral conducted in the hall.  The Merton Drama Club once put on "Ancona" and a Colombian Gold Exhibition was held under the auspices of the Yea Branch of the Victorian Arts Council.
Over the years the tennis courts have been used for social and competitive tennis.
In the 1960's the control of the hall was transferred to the Yea Shire Council with the management handled by the local Committee.
In 1969 the hall was used as the assembly area and Head Quarters for fighting the big fires in the Yea valley. The Red Cross operated from the hall to feed the 100 or so fire fighters.

In 1976 a portable classroom was set up beside the hall.  This meant that the classes could be divided.
In 1982 the new school buildings were opened but the hall continued to be used for meetings and social occasions. In 1996 a new roof was put in place. In 2000 a new entry porch and internal disabled unisex toilet was added.  The porch gave a shelter for children awaiting the school bus. In 2001 the Hall was re-blocked; the floors sanded and polished, and it was repainted inside and out.  The finance for these renovations came from a Victorian Government grant plus money raised by the community through bush dances and other activities.
In 2002 the historic photographs were placed around the hall in time for the April centenary celebrations of the Highlands Primary School.
On the 20th March 2004 the first Highlands Art and Craft Exhibition took place with great fanfare and celebration. In 2005 extensive landscaping was carried out, with plans in mind for further improvements and outside activities. On the 5th& 6th March 2005 the second Highlands Arts Experience took place and this continued until 2014.

Since 2005 many more activities and social events have taken place in our community hall.
The work team from the Justice Department have been coming for the past few years, tidying up the grounds and they repainted the outside of the hall in preparation for a major event in 2018. Covid 19 stopped them from coming and we are hoping that they will soon be able to come again.
In 2018 the highlight was a huge wedding celebration, fully catered for, with an enormous marquee on the tennis court for 100+ guests with karaoke and dancing in the hall. It was a great success and enjoyed by all who attended.
In 2018 Judy Reid stepped down as President after 18 years. She had been an inspiring leader and made many significant improvements in her time as president which were greatly appreciated by the general community.
2018 is also remembered for the arrival of the dreaded termites. They have caused a great deal of expensive damage and heartache but the Flick man assures us that the problem is now solved.
For three years the hall committee provided lunches for the GT bike riders which was lots of fun. Again, Covid has stopped such events but hopefully our lives are returning to some sort of more relaxed normality.

In 2009 Drinks on the Deck began and is still going strong, and growing in numbers. Locals meet every second Friday of each month. All bring a meal to share.  Approx. 25-30 people attend regularly, even in the middle of winter. It is really appreciated and enjoyed by the local community as a convivial place to get together and enjoy a meal and a catch up.
Over 100 community members get together each Christmas for the end of year breakup. It’s a wonderful venue for catching up with neighbours and other locals who you don’t meet in your day to day lives. Santa usually arrives to meet and greet the children with a small gift.
People appreciate being able to hire the hall for meetings, afternoon teas, birthdays, etc and all are impressed with the décor and the excellent condition that the hall is kept in, thanks to a caring, active hall committee.